The possibility of art that is effective in the public sphere involves recognition of the art and poetics present in “real” actions, posits this seminar. Expressing this necessity, at the end of Poeta delle ceneri (1966-67), Pier Paolo Pasolini wrote: The actions of life alone will be communicated, and these will be poetry, because, I say it again, there is no other poetry than true action. Unlike other artists from the same generation, who generally leaned towards a dissolving of artistic practice in life, the interests of the author of Scritti corsarifocused on the practice of a poetry as real as the actions of life. This perspective, which remains relevant in our day, entails recognition of forms of poetry, art and cinema that continue to be autonomous but that speak the same “language” of reality.

In the context of this seminar the term “action” does not refer to gestures that make a direct or explicit intervention, but rather to the hybrid methods situated in the confluence between visual and performing arts (mainly from the 1950s and 1960s onwards) and characterized by an expanded practice that avoids self-referentiality. We are talking about practices that have left the theatre building, and also those practices the driving force of which is reality.

There is no other poetry than action aims to discuss – from the vantage point of artistic practice (with Rabih Mroué, Rolf Abderhalden and Héctor Bourges) and from the perspective of research (with Maaike Bleeker, Adrian Heathfield, Simon Bayly, Leire Vergara, Jordi Claramonte and Ana Vujanović) – the specificity of contemporary stage practices, the questions arising from such practices and the theoretical tools we can use to think about them. 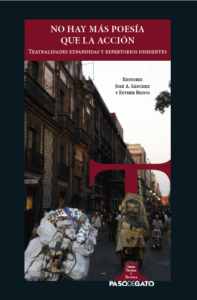