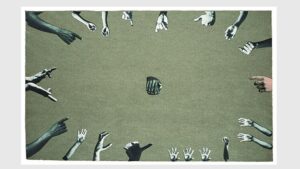 Leon Ferrari wrote The Words of Others between 1965 and 1967 urged by the extreme violence and inhumanity that at that time was manifested in the news that came from the Vietnam War, but that announced a way of excercising the power that would soon be imposed on large parts of Latin America. The violence of power contrasted with the rhetoric of good intentions, the frivolity of the spectacles carried out by political leaders and the cynicism in the justification of the violation of fundamental rights. The textual collage method also allowed Ferrari to stage the false neutrality of the media, unmask the fabrication of stories and make evident the continuity between the propaganda of the past (the Bible, fascism) and the current one.

The Words of Others keeps on being a theater of the present as we can recognize now a repetition of arguments and modes, as well as an authoritarian drift and the choice of inequality and segregation as methods of domination. It is not gratuitous that Ferrari, which until then had focused mainly on ceramics, sculpture and drawing, ended up producing a theatrical collage to intervene in the present: the live confrontation with the public was once again the most efficient way for a practice that assumed the need to get involved in politics; and regardless of the fact that it could be qualified as non-theatrical or non-artistic, Ferrari’s proposal showed how art and theater could exercise an action of compromise and denunciation in a society in which war, economics and politics were already a spectacle.

The first part of the seminar will analyze the singularity of “The Words of Others” and its importance in the evolution of León Ferrari’s artistic practice and thought, and the inscription of this work, and of the artist’s production, in the historical and political context of the sixties, with special attention to the Latin American and Argentinean context.

The second part of the seminar will deal with the resonances of The Words of Otherss in the present. To this end, we will consider the practice of artists  placed in the risky edge of political action, reediting modes of commitment to the present similar to those that Ferrari himself maintained throughout his life. There will be a debate on rhetoric in the media today: its complicity with power and critical alternatives. And the validity of the performative collage as a means of construction of discourse will be evaluated.

The seminar will conclude with the performative reading of The Words of Others, in its full version, lasting around seven hours.

This program is a collaboration of Center of Studies and Live Arts of the MNCARS with the research group ARTEA, UCLM, in the frame of the research project  Expanded Theatricalities (MINECO. HAR2015-63984-P)