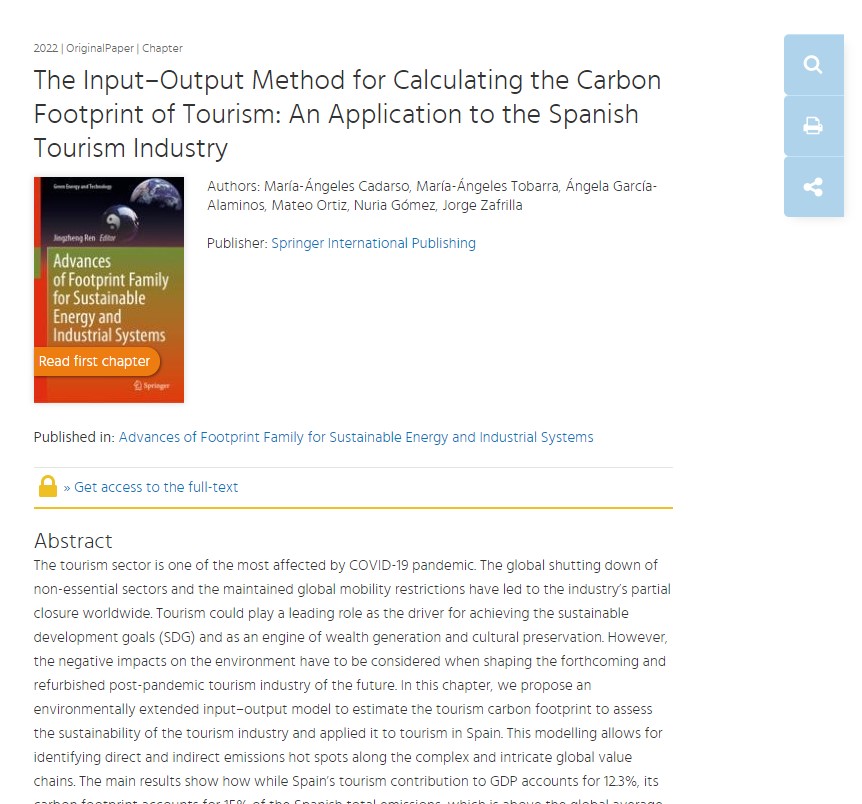 Sustainability and resilience in tourism through carbon footprint assessment

Tourism is an activity that represents a high share in GDP and employment in developed economies as the Spanish one (in which tourism contribution to GDP accounts for 12.3%), but also in developing areas. However, the sustainability of such activity is controversial because it is highly pollutant given its transport dependency. The pandemic crisis has struck tourism heavily, showing its high vulnerability too. Its recovery in the new normality shouldn’t constitute a return to the pre-pandemic situation, instead, it should be regarded as a chance to turn into a more sustainable and resilient activity. In this sense, this chapter calculates the carbon footprint of tourism for the Spanish economy in a pre-covid context and proposes it as a measure to evaluate monitor and establish strategies towards the reduction of the environmental impact of tourism.

The main results show that the carbon footprint of tourism in Spain accounts for 15% of the Spanish total emissions, which is above the global average (8%). In global terms, 29% of the total carbon footprint is imported, so it is, directly or indirectly, embodied in the global production chains. It is concentrated in some close European Union countries, China, BRIIAT, and the United States. At a sectoral level, the Spanish tourism carbon footprint is concentrated in some industries where emissions are mostly domestic (air transport, land transport, or retail trade).

We invite you to have a look at the chapter in this link: https://www.springerprofessional.de/en/the-input-output-method-for-calculating-the-carbon-footprint-of-/19368472