The MOMU project has been the example selected by the UCLM as part of the Informative Workshops carried out by the European Projects Office (OPE) of the University of Castilla-La Mancha (UCLM) in the Campus of Cuenca last 13th March .

The aim of these conferences was to disseminate the work carried out from this office, as well as to present researchers with the most up-to-date information on European calls for proposals and other regulatory aspects that may be useful to them in preparing their proposals.

Emilio Gómez Ciriano, director of the MOMU project, presented the main problems and solutions when facing the development of a European project of these characteristics. In addition, the participants had the opportunity to know first hand, all the phases of the project and to know the publications resulting from the project.

The MOMU project has finished at the end of August. And the last seminars have been hosted some weeks before. For examples, the second @MimoMomu final seminar in Finland gathered together over 70 practical nurse students and teachers to Turku Vocational School to think what are the possibilities to use art based methods and work multiprofessionally in their profession. The seminar was the 17th of August.

Also In Manchester the free training for organisations interested in Multi-Professional Work between the Arts and Social/Youth Work has been hosted the 30th August.

These seminars have been an opportunity to present the Handbook and the final results of the project. Handbook for Moving towards Multiprofessional Work 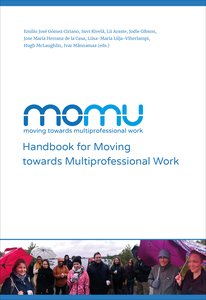 The handbook contains two training packages: one for arts and social work professionals and teachers, and another for students. In addition, it covers theory of multiprofessional work, tools for assessment of trainings and plenty of interesting case examples of multiprofessional cooperation and related training events in the fields of arts and social work in Estonia, Finland, Spain and the UK. The publication is available in PDF format free of charge:

This video report is a summary of the MOMU Spain Dissemination Seminar that took place on 26th April in the Faculty of Social Work of the Complutense University of Madrid. In the seminar participated more than f fifty students, professors and professionals of Social Work and Art.

Last 26th April, the dissemination seminar of the MOMU Spain  project took place in the Faculty of Social Work of the Complutense University of Madrid with the participation of fifty students, professors and professionals of Social Work and Art.

The seminar began with the welcome by the Dean of the School of Social Work, Aurora Castillo, who thanked to all the participants. Then Emilio José Gómez Ciriano, project manager in Spain, presented the main results of the project, which in next june will materialize in a handbook in English and another in Spanish.

Emilio Gómez pointed out that this project «is a listening project, and the different views of each country participating in the MOMU have made the project very productive and complex at the same time».

Luis Sáez, creative director of the project  «Debajo del Sombrero» (Under the Hat), started in the second part of the seminar with the presentation of some of the projects that have served as reference in the research of MOMU Spain. Luis Sáez has explained that Debajo del Sombrero is a platform for the creation, research, production, and dissemination of art where its main protagonists are people with intellectual disabilities. The workshops are developed in spaces that enable learning and dialogue with other artists, as well as the realization of both individual and collective projects. Under the Sombrero is a non-profit association of national scope declared of Public Utility.

As Luis Sáez pointed out, «in Debajo del Sombrero we work with artists with intellectual disabilities and in some moments what we have to do is open the space and wait». As stated Óscar Martínez, member of the MOMU Spain project, «the project works with artists, and gives them the possibility of making art. The art does not have a purpose a priori, it is made to be done, it is not done at all in concrete although it can come to serve «.

The afternoon session was presented by Esther Mercado, professor of the UCM and member of the steering group, and was developed by Nieves Martínez, member of the Asociación Grupo 5, with a theater workshop as a method of social intervention for people with different abilities. The Asociación Grupo 5 is a non-profit association, whose main activities are Sociocultural Animation and Social Work in Castilla la Mancha. In 2008, the Social Work department was launched, providing technical support to both collective clients (Associations, Foundations, Legal and Labor Counseling, etc.) and individual clients (demands from private clients).

Nieves presented the theatrical experience he performs with people with intellectual disabilities and which is an activity that helps them improve their social skills and allows them to leave their routine activity within the center in which they live. As Nieves pointed out, «with the theater they are protagonists, they are applauded and aren´t reprimanded». The seminar ended with the satisfaction of all the participants who had first-hand knowledge of the results of the project, months before the end of the meeting to be held in June in Manchester.

In three weeks, April 26th, will be hold the Spanish dissemination session of the MOMU project. The Seminar entitled: «Art and Social Work, common places» will take place in the the Faculty of Social Work of the Complutense University of Madrid. The main objective of this seminar is to present the results of the project and the main conclusions that are part of the handbook that will be presented in June at the Manchester meeting.

After two intensive working days, the editors of the MOMU handbook have  decided all the details of the publication.

The date to release the handbook will be the end of Janury and there will be three other editions in finnish, spanish and estonian. In addition, in April and May there will be some seminar to diseminate the achivements of all this project. Finally, a conference will be hosted next June in Manchester to show all the results.

The Spanish team leads the handbook compilation and the Spanish project manager, Emilio Gómez said «it is a challenge to coordinate a book with four national different visions, but the result will be amazing».

Cuenca will host a meeting with all the partners next 28th and 29th november. This meeting is the last step to finish the edition of the handbook. The handbook will be publish in January 2018 and after there will be some workshop to disseminate the results.

All the achievements will be presented in a conference  next June in Manchester.

The University of Tartu (Estonia) hosts all this week the new intensive seminar of the European project Ka2 Eramus +, MOMU (Moving towards multiprofessional work) from 2nd to 6th October 2017.

Seventeen professors and researches from the Turku University of Applied Sciences (Finland), Manchester Metropolitan University (UK), University of Tartu (Estonia) and University of Castilla-La Mancha are working this week to advance and complete this project next year.

The first day, the session was focused on the development of the training package in all members countries. This issue has been the central activity of the project throughout the year.

On the second day, the group visited the Viljandi Culture Academy to know  some experiences on multiprofessional work. Viljandi Culture Academy is open for international cooperation and cross-cultural communication. It is a school with a special atmosphere, a school with a unique student community and curricula, as well as an environment that provides good possibilities to obtain knowledge and skills in different fields of culture by combining academic knowledge from different fields with a creative and new approach. This project, from the Tartu University, values close interaction in both our study and working environment. Therefore, there is a lot of interaction and cooperation between students from different fields, teachers and administrative staff.

On wednesday, discussions focused on competencies and the preparatory work for the final handbook, one of the highlights of the project.

During these days, the MOMU team has enjoyed the hospitality and traditions of Estonian hosts.

Go to the Spanish version this information